Experience Virtual Reality from the comfort of your computer screen! Just click the link to take a close look at some virtual derelict farm houses from around Saskatchewan! This work was made by Ryan Hill and was meant to be viewable in our Digital Lounge VR Station as a response to work in the exhibition The Art Happens Here.

Description: Inspired by Morehshin Allahyari’s work ”MATERIAL SPECULATION: ISIS“ in the Net Art Anthology, "Artifacted" is an exploration of a ubiquitous artifact of the Saskatchewan landscape: the abandoned farm building. The title of this piece plays with the multiple definitions of the word “artifact,” which can mean both the object itself as well as incorrect, confusing, altered, or misleading data or representation of information. Showcasing the buildings draws attention to the history of the built object from initial creation to its decay (the artifact as archaeological object) and the digital conversion into a 3D model creating graphical artifacts that transform the object into something different (the artifacted object, or flawed representation thereof). The collection of artifacts also invites connections to family, friends, death, and place as well as the nature of computer graphics and various filters of reality when viewing an object.

Bio: Ryan Hill has been working in various areas of interactive tech and the arts for over 15 years. He has worked in web development, mobile apps, sound for film and television, music production, Virtual and Augmented Reality and much more. Throughout his career he has always pushed boundaries into new areas of media and has always been excited to see what something can do. He has a BSc in Computer Science from the University of Regina where he focused on creative technologies.

About Material Speculation: ISIS For the project Material Speculation: ISIS (2015–16), artist-activist Morehshin Allahyari 3-D printed replicas of a set of twelve artifacts from the ancient cities of Hatra and Nineveh that were destroyed by ISIS in 2015. In order to create CAD model facsimiles, Allahyari performed extensive research, corresponding with curators and historians and tracking down images taken at various angles to refine her replicas. In 2016, as part of Rhizome’s series “The Download” curated by Paul Soulellis, Allahyari published a 570 MB ZIP file containing research and 3-D-printable files related to one of these lost artifacts: a Roman-period figure from the Mosul Museum portraying King Uthal of Hatra, his hand raised in prayer. The files were released with the idea that other users could save and print them, creating a “distributed monument” to stand in for the lost original. 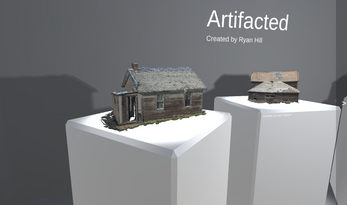